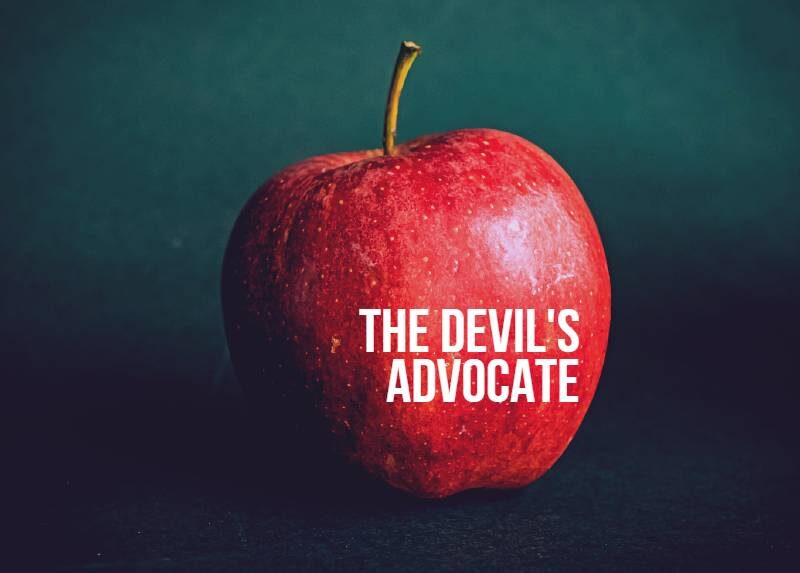 The Devil’s Advocate pulls off complex philosophy, popcorn thrills and a risky twist. Here’s how it works.

What is The Devil’s Advocate about?

A small-town trial lawyer with an unbeaten streak looks the other way when he realises his client is guilty. The case makes Kevin Lomax hot property, but the firm he signs up with has connections in very high – or should that be very low? – places.

The movie in a mirror

It’s pretty rare these days to set up a fantastical story that ends, “it was all a dream – and then I woke up”. Horror legal thriller The Devil’s Advocate takes a sideways run at it by having the story take place in a daydream.

Halfway through a court case, Kevin Lomax realises his client is guilty of child abuse. Overwhelmed, he excuses himself from court to wash his hands (commonly symbolic of guilt, no less).

In the bathroom, Lomax loses himself in his reflection, imagining a future in which he joins his father’s law firm – and his dad is Satan.

The dream mechanism is a Ghost of Christmas Yet To Come. It shows Lomax how his life will turn out according to his choices. Defending slimy maths teacher Gettys is the first step on a slippery slope.

Nineties thriller The Game does something similar, while It’s a Wonderful Life (1946) does the opposite: it explores what the world would be like without the central character.

At the end of the film, Kevin’s wife Mary Ann (Charlize Theron) kills herself with shards from a broken mirror.

Seeing demons in reflected surfaces tips her over the edge of sanity. In fact, Mary Ann sees the world as it really is through these weird reflections, whereas Kevin sees what he wants to see.

But Mary Ann’s broken mirror has a greater significance. It symbolises the end of illusion, and it’s timed to correspond with Lomax learning the truth about his father.

The movie’s mirror-in-a-mirror metaphor is particularly fitting because Kevin’s biggest sin is vanity: he’s in love with himself and his slick professional successes.

There is another interpretation, however where, rather than a dream, the story unfolds exactly as we seen on screen.

When Lomax shoots himself at the end of the film, it undoes Milton’s plans for world domination. This reset button returns Kevin to the first crossroads, where he gets another shot at making the right choice (see also Don’t Let Go).

Kevin Lomax belongs to that class of cinema character with a dad in the closet. Like Luke Skywalker, the father he eventually meets is a force of evil.

However, Lomax is his father’s son long before he learns the truth about Milton (Al Pacino):

And while Kevin’s behaviour becomes dodgier the longer he spends in New York, he already has the basics down. That includes turning a blind eye to his clients’ guilt.

This is Milton’s trap. Humans always have free will to choose their own actions – all Milton does is set the stage, knowing they’re incredibly easy to tempt to the dark side.

However, Milton needs Lomax and his half-sister to procreate – and he needs Lomax to choose this out of free will. Ultimately, the film is Milton’s big sell for the firm and the family vision.

Milton is a very modern devil. His power lies in being everywhere and invisible, powerful yet indistinguishable. The new hell is all around – and Milton’s domain is in the heavens (i.e., in the penthouse).

In the film, New York represents both big city temptations and hell on Earth. As Lomax’s mother Alice (Judith Ivey) warns Lomax via the book of Revelation:

“Fallen, fallen is Babylon the great. It has become a dwelling place of demons.”

This foreshadows the entire plot. Satan himself now has an office in Babylon (New York). And, as per 17th-century epic poem Paradise Lost – by poet John Milton, no less – it’s the backdrop to the fall of Mankind.

It’s no coincidence Milton talks about secretly being a Master of the Universe. Writer Tom Wolfe used the term to talk about the brash, new-money American elite, such as the men who control Wall Street, in Bonfire of the Vanities.

Milton is playing with words when he uses the phrase because he’s both a power player in New York and the literal dark master of the cosmos.

Meanwhile the big city, with all its temptation and excess, is too much for Mary Ann. She fails the test – with shades of Eve in the Garden of Eden – and chooses to die. Later, when Kevin reaches enlightenment and dies, it ‘saves’ him (technically it saves both of them).

It’s a difficult journey, though. Doing the right thing is often harder and far less fun. Milton models the outrageous and easy life Lomax could have. All he has to do is choose it.

Is it easier to be bad? This is Milton’s sales pitch (just let the guilt go, he says).

Either way, the film repeatedly asks Lomax to choose whether to act in self-interest or for more noble ends (see also Edge of Tomorrow).

Initially, the choice is whether or not to represent a paedophile. Lomax not only jumps at the chance, he bullies the young girl accusing his client.

The film ends with exactly the same choice. Lomax knows Alex Cullen is guilty but once more turns a blind eye. Along the way he puts lust before marriage, and career before his wife’s wellbeing.

Yet only Mary Ann is honest about this when she tells Kevin just moments before dying:

“the money, we just drank it down … we knew they were guilty.”

Note how Kevin’s collar is bloodied after she dies, as if he’s wearing her death, or the responsibility for it.

Lomax has no end of opportunities, but only makes the right choice at the very end of the movie. He chooses to die rather than help the devil win the world (and you have to wonder if that’s just another way of not breaking his winning streak).

The illusion of paradise is partly to blame for this. Lomax mistakes Milton’s rooftop empire – and its Earthly pleasures – for heaven, not realising he’s already in hell.

In 1997 movie The Firm, a small-town lawyer is courted by a big city law firm, only to discover he’s signed his soul away to dark forces.

Someone playing devil’s advocate takes an opposing, unpopular view for argument’s sake. Here, it’s Milton (and as he’s Satan, it makes for a dizzying pun).

In the film’s final scenes Milton makes an impassioned speech about the benefits of being bad. He calls God a prankster for giving Mankind desires, but commandments which criminalise them.

But while Milton plays devil’s advocate, so does Kevin Lomax. He’s a lawyer (an advocate), who defends the indefensible and, later, works for the devil himself.

The end is nigh

The film ends with a twist about Lomax’s dad: it’s Milton, baby.

Milton himself drops a huge hint on Kevin when he quotes the scripture he used to seduce Alice:

Unfortunately Lomax doesn’t yet recognise the significance of the words.

During his big sell on brand Satan in the finale, Milton also reveals he’s Larry, the journalist who followed Lomax into the courtroom toilets. And Larry is the trigger for Kevin’s choices.

At the start of the film, Larry implies Lomax’s losing streak is about to be over. This nudges him to overlook Gettys’ crimes.

At the end, journalist Larry (actually Milton again) says he can help Lomax become the star he really is. By accepting the offer, Kevin appears to start the cycle all over again.

Both times, Kevin’s vanity is his downfall.

There’s an interesting loophole here, though. Milton confesses that he’s Larry – yet when he’s tempted again at the end of the movie, a seemingly oblivious Lomax swallows it up.

There are signs that Lomax is still trapped in one more circular narrative, for instance when Gettys screams: “you’ll burn for this!” This suggests a fiery, hellish future still lies ahead.

There’s also some ambiguity when Larry declares: “This story. This is the one you dreamed about.“

Ultimately, it’s not the devil that recruits Kevin Lomax … it’s Lomax himself.

Does cinema push positive male role models out of the picture?