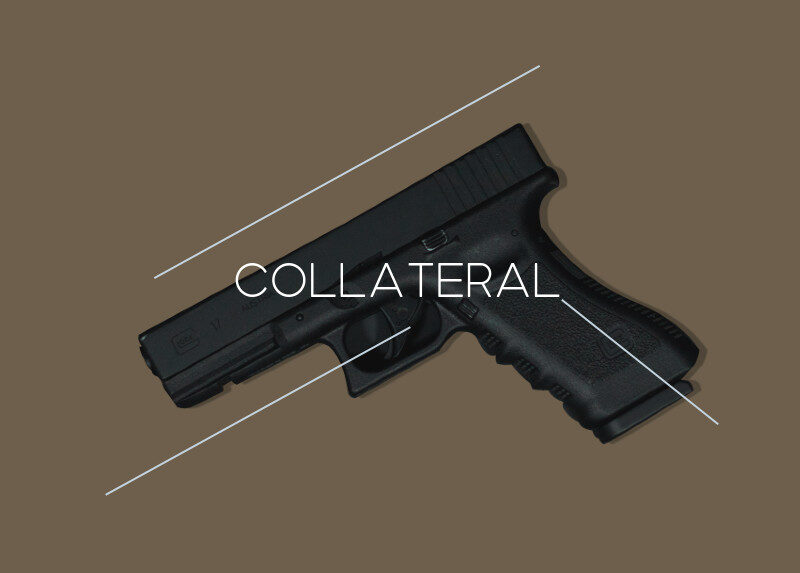 When he unknowingly picks up a paid assassin, an unassuming taxi driver expects to become collateral damage. But who’s really in the driving seat?

What is Collateral about?

Cab driver Max (Jamie Foxx) is on a high after hitting it off with lawyer Annie (Jada Pinkett Smith). Then he picks up his next fare, slick businessman Vincent (Tom Cruise), and things take a dark turn.

Vincent asks Max to make five stops over the course of the night: it’s against cab company’s rules, but he’ll pay hefty cash bonus. Unfortunately, Vincent is a cool-headed hitman … and his stops are all contract kills.

The hitman and him

At first glance, Collateral would seem to be a story about opposites.

Max is a part-time driver and full-time dreamer. He talks a good spiel about starting his own limo firm … but never does anything about it. In the meantime, he gets really good at navigating the streets of Los Angeles, making him an expert at a job he doesn’t care for.

Unlike Max, hired killer Vincent is a man of action, not introspection. He kills for cash, with zero guilt.

Vincent is suited, steely-eyed and dangerously efficient. Max dresses down and is tactfully silent towards rude passengers and a belligerent boss.

Vincent doesn’t care for LA; Angelino Max is a stranger to violent death. Chalk and cheese, pineapple and pizza, right?

In Collateral, the story’s conflict comes from the collision of opposites. Consider:

Their goals repel each other, i.e., these characters are moving in opposite directions. And yet a quirk of fate sees the men forced together and travelling in the same direction (in Max’s taxi).

But if the clash of opposites creates the drama, the plot’s momentum comes from similarities.

Max and Vincent are actually quite similar

If Max and Vincent are from different towns and poles apart on the moral spectrum, how are they in any way similar?

Well, both have jobs with no safety net: no holiday pay, no benefits. At the same time, both are highly adept at their jobs.

Vincent is the killer who never misses, thinks fast and always lands on his feet. Max is an exceptional driver who can mentally calculate the fastest route to any destination at any time of the day.

It’s a match made in heaven. Vincent has to scout the city on a super tight schedule; Max is the getaway driver he needs.

Of course, this is merely coincidence – or fate, as Vincent calls it. The bigger connection is one of potential. Vincent is the man Max could be, if he’d only apply himself.

Vincent even steers him towards this. He sticks up for Max’s employment rights, and encourages him to call the girl he likes.

But this isn’t just free life coaching. It’s manipulation. Vincent grooms Max to follow orders and, more specifically, to cross boundaries (starting with putting a body in the boot of his car).

Does Vincent insist they buy flowers at the hospital to because he loves mothers? Possibly. But his interventions are primarily about his job, i.e., they remove distractions. Visiting Max’s mum is also a way to gain emotional leverage.

Ultimately, Vincent teaches Max how to stop thinking and start acting. And that’s where the plot’s most explosive conflict comes from.

Who’s in the driving seat?

Collateral is about characters locked in a battle for supremacy and survival. The taxi is a metaphor for control.

Max may be in the driving seat, but he has no control over his life. While his passengers are living their messy lives, he’s just a bystander. He can’t even ask for Annie’s phone number, and only gets it because she gives it to him. Picking up Vincent highlights just how passive and powerless he’s become.

In contrast, Vincent is a control freak; he’s always in charge, even when the unexpected happens. He’s also the ultimate back-seat driver. He tells Max where to drive, how to act, and when he can leave.

Spoiler: he can’t leave. Vincent presumably plans to frame him thenkill him, as with the previous dead cabbie Detective Fanning (Mark Ruffalo) mentions.

But as traumatic as Max’s night is, Vincent’s influence is strangely ambivalent.

He repeatedly excuses murder, as though it’s a sometimes necessary evil (i.e., foreshadowing the finale). He also draws attention to their similarities – although, as per the stories about his parents, it’s performance for the sake of manipulation.

Max is stuck in a groove, doing the bare minimum as a means of not getting hurt. That is, until Vincent pulls him into a real-life roulette:

Like some mercenary ghost of Christmas Yet to Come (see also The Game), Vincent teaches Max to fight for what he wants. And it works out way better-worse than Vincent expects.

What is collateral, anyway?

When Max calls himself collateral, this is what he means. Vincent has just killed a jazz musician, and Max is repulsed – but also senses how disposable he is.

But collateral can also mean something that runs in parallel. That’s apt for a story about same-but-different characters on converging tracks.

In the film, this merging becomes quite literal.

Vincent coaches Max to be more assertive, active and ruthlessly pragmatic: more like him. Later, he forces him to assume his identity, i.e., to become him.

It works. Max finally unleashes his assertive side when he warns crime boss Felix not to goad him. When Vincent kills Detective Fanning – a story strategy that leaves Max completely isolated – Max finally discovers his innate heroism (see also The Hunt for Red October).

Of course, Vincent helps by showing Max the ugly reality of his dreams:

“You were never gonna do it anyway. You’ll push it into memory, then zone out in your Barcalounger, being hypnotized by daytime TV for the rest of your life.”

Two points of significance follow. Vincent can’t answer Max’s question about what drives another human being because he doesn’t know what anyone else is thinking (sociopaths have reduced empathy).

Max proves his hunch seconds later when he crashes the car – an outcome we can predict long before Vincent does.

Note that just before he veers ‘out of control’, Max further assimilates Vincent’s identity and attributes. He even uses Vincent’s catchphrase: “new news!”

In the end, Max’s journey is about taking control rather than being collateral … and he does it by being a better hitman.

Side note: the boss and the boyfriend

Max chooses a steady but unrewarding job, and lies to himself that it’s a step-up to better things. Meanwhile, there are no benefits to speak of. His low-life boss even tries to pin liability on Max despite having company insurance.

When Vincent steps in, it’s quite the show of solidarity. Of course, this is just cat-and-mousery, because he’s going to kill Max anyway. There’s further irony because Vincent is a way worse boss. After all, most employers don’t kill you at the end of your shift … though let’s not give them any ideas.

Max inadvertently ends up in Vincent’s employ when he breaks the cab regulations and accepts cash, i.e., it’s a contract to do business.

Having stumbled into this far bleaker role, Max must pick off his bosses one by one to win back his freedom and call the shots:

The other dynamic of interest is the way their relationship mirrors the romantic. Aside from the killing and animosity, there are parallels with date night and a warped kind of intimacy:

Max’s face in the jazz club reveals how compelling this is. He listens in to the Charlie Parker dialogue with rapt attention, as though the man sitting beside him didn’t just throw a body in the trunk of his car.

In a story all about pseudo replacements (bosses, father figures), Vincent even stands in for the woman Max let slip through his fingers.

The question that dogs the plot is: deep down, is Max just a passive version of Vincent? Is he a good man because he’s truly a better person, or because he lacks courage?

Vincent pushes Max out of his safety zone. As a result, he starts vying for control of the wheel, figuratively and literally, perhaps for the first time in his life:

So Max has an inner aggression and the drive to succeed (and stay alive) after all. Ironically, the encounter with Vincent leaves him better off.

In the end, the men are the same, or become the same. They’re capable of the same strength and ruthlessness – but Max won’t let himself be corrupted by that power.

When he evades arrest, he does it as respectfully as he can. And when he kills Vincent, it’s to save Annie.

In storytelling terms, a willingness to change is the rejection of cowardice disguised as self-protection (i.e., passivity – letting life happen to you). The plot rewards Max’s efforts with the hero’s miracle.

Vincent has been a contract killer for six years (“private sector”), and we never see him miss his mark. But when they go head-to-head on the subway, the door frame shields Max like armour while his bullets fly through the glass.

It’s fitting that this showdown happens away from the taxi. Sometimes you have to climb out of the driving seat to truly take control.

Edge of Tomorrow (2014): time loops and circles of hell