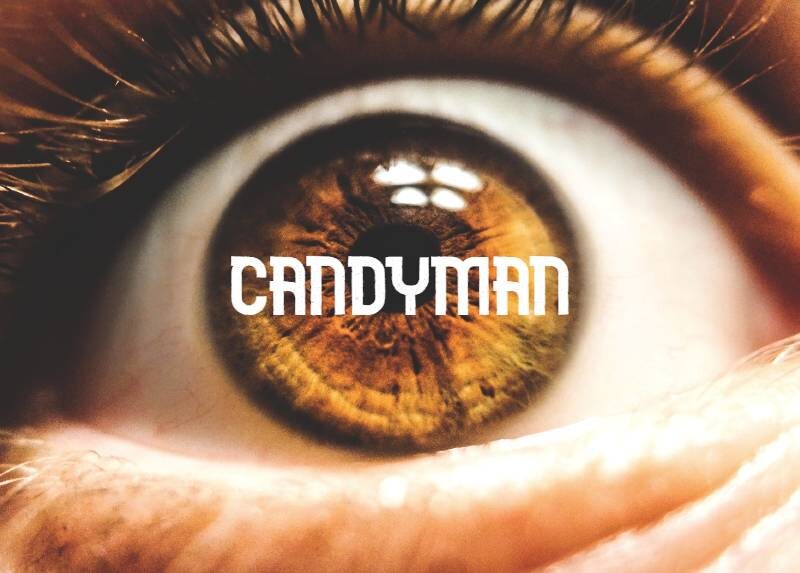 On its 30th anniversary, 90s horror movie Candyman remains remarkably relevant on the race, horror and class issues that continue to move us.

What is Candyman about?

Chicago grad student Helen Lyle (Virginia Madsen) is researching urban legends when she stumbles across rumours of a hook-handed serial killer they call ‘Candyman’. According to local legend, saying the name into a mirror five times causes him to appear from beyond the grave.

When Helen learns the killer lives in a nearby housing project, she goes looking for the man behind the myth. Unfortunately for her, she finds him.

This article unpacks the themes in Bernard Rose’s 1992 horror film, Candyman – with spoilers.

The true(ish) story of Candyman

Candyman’s genesis lies in a short story by British horror writer Clive Barker. That story, The Forbidden, provides the bones of director Bernard Rose’s film adaptation. But as well as the story of a grad student sucked into the urban legends she’s researching, the film weaves in true events and sharp social commentary.

At its core, Candyman is about the racial inequality that haunted Chicago’s doomed Cabrini-Green social housing project. The estate provided affordable housing for working class African Americans after World War II. But what could have been a landmark in social equality was stymied by racist public policy that saw the estate fall into neglect, disrepair and hopelessness.

The film is rooted in this urban history (some of the film was shot on location here, too). It also references the real life murder of Ruthie Mae McCoy.

McCoy was killed in her home in the projects by burglars who used the narrow wall spaces to move between apartments. Her murderers did indeed ‘come through the bathroom mirror’.

The movie adapts this for its Candyman myth, about a bogeyman who appears in mirrors and kills in cold blood.

But the significance of the reference is that those in social housing like Cabrini-Green really were sidelined and ignored economically, socially, and even when they called 911 and begged for help.

So what’s the source of terror in Candyman? Obviously there’s the devilish spectre of Candyman himself (Tony Todd), along with whispered folk lore.

Candyman tells us he exists because of rumour. It’s our whispers about him that keep him alive – just like any urban legend or superstition.

But the film has a more waspish point to make. For the wealthy middle classes, especially cosseted white academics like Helen, true terror is having to look poverty in the eye instead of pushing it out of sight.

When Helen investigates McCoy’s death at Cabrini-Green, she makes a shocking discovery. Her own condo in wealthy Lincoln Village is an exact replica of those at Cabrini-Green.

This is a rather tragic instance of mirroring. Cabrini-Green is shrouded in graffiti and the fug of unemployment while residents at Lincoln Park thrive. Yet the main difference between the buildings is their postcode.

As far as the film goes, the coincidence ties Helen to Cabrini-Green. It gives her a compelling reason to ‘climb through the mirror’ into another reality (the ghetto she avoids seeing otherwise).

Why the film is relevant 30 years later

We can’t get enough of boundaries. We zone our cities, while access to healthcare and education can be a postcode lottery: what you get depends on where you live (see also Beverley Hills Cop). For those who have plenty, it can be hard to think about those who go without – so we don’t look.

At the same time, we create urban legends and scary stories about transgressors who cross boundaries: immigrants, ethnic groups, the unemployed, trans and non-binary people. We recast these outsiders as bogeymen.

Perhaps we invest in these dehumanising narratives in part to assuage the guilt of ownership and privilege – and as an excuse not to help.

This underpins the Candyman film universe, too. 1990s Chicago has invisible boundaries that keep poor and wealthy people apart. It’s a division which then as now is based on racial inequality and segregation.

The Cabrini-Green residents are all but invisible, just as their poverty goes largely unseen. They’re deliberately ghettoised, so that the middle classes don’t have to look at them.

Candyman proves the lie in such arbitrary boundaries. They mean nothing to him: he comes and goes through mirrors and walls just as he pleases. Through him, the inner city – and the horrors of injustice – bursts out of it ghetto limits and into Helen’s field of vision.

This begs the question, does society fear bogeymen, poverty or Blackness? Perhaps it’s a bit of everything.

Through the mirror and back again

Mirroring – plots and characters that are reversed or reflected in unexpected ways – are central to many stories. And it’s abundant in Candyman.

The thing about gazing through mirrors – through a glass darkly, if you like – is that it’s often a transformative act in literature and film. Alice went to Wonderland; so does Neo in The Matrix. In Black Swan, it takes Nina on a tragic journey of discovery and delusion.

Is Helen a murderer?

Candyman is part horror movie and part gothic romance, with a love that endures beyond the grave.

Candyman returns for Helen. Or so he says. After all, he tends to come on demand for anyone who says his name enough times (chiming with our superstitions about ‘speaking of the devil’).

He abducts Anne-Marie’s baby, beheads her dog and kills Bernadette to manipulate Helen into doing what he wants. Later, he guts her psychiatrist (giving her a means of escape).

Yet like any good urban legend, there are holes and doubt. We only see Candyman kill Dr Burke. The other times, Helen conveniently blacks out at the crucial moment, making her the classic unreliable narrator.

It’s possible Helen kills the others, or helps Candyman. Why? Because she’s his long lost love (she just doesn’t know it yet). By the end of the film, there’s no more pretence: she’s revealed to be a cold blooded, hook-wielding killer, just like Candyman.

Keep in mind no one else can see Candyman. The CCTV recording at the mental institute suggests he may be her hallucination, or a part of her personality (which, in a way, he is).

And either way, Helen is at least partly responsible for Dr Burke’s death. She summons Candyman knowing exactly what he’ll do. Meanwhile Candyman, who supposedly magics Helen to other locations at other points in the film, here only gives her a cover to escape. That ties in with him being her hallucination.

Sweets to the sweet?

The urban legend in Candyman is a kind of curse (see also Macbeth). Helen hears the rumours and is bitten by curiosity. Or rather, is infected by it.

Female curiosity often ends badly in literature: there’s a price to pay for too many questions (or being overly educated). For Helen, this sees her increasingly pulled into Candyman’s world. In other words, once through the mirror, she can’t come back.

Bit by bit, the world comes to view Helen as an extension of Candyman himself. Finally, she becomes him, in a kind of reverse superhero metamorphosis, from nobody into villain.

But Helen’s journey was perhaps always death-bound. It’s there in her ties with Ruthie Mae McCoy and Cabrini-Green, and with Candyman himself.

In Hamlet, the Queen announces the death of Hamlet’s true love, saying:

“Sweets to the sweet, farewell!”

The sweets she means are funeral flowers. The phrase in the film spells out Helen’s fate, right from the moment she spots the writing on the wall (the graffiti). Any doubt in this is vanquished with the chocolates stuffed with razor blades (another urban legend, one that flourishes at Halloween).

Candyman may have come back for Helen, but there’s nothing sweet about his ownership of her. You can see this in the quick edits that contrast Helen’s face in light and dark when she first meets him in the car park.

Whether this hints at the darkness of death or of ultimately being consumed by revenge, Helen’s fate is sealed.

The Woman in the Window (2021) explained: The Hitchcock connection