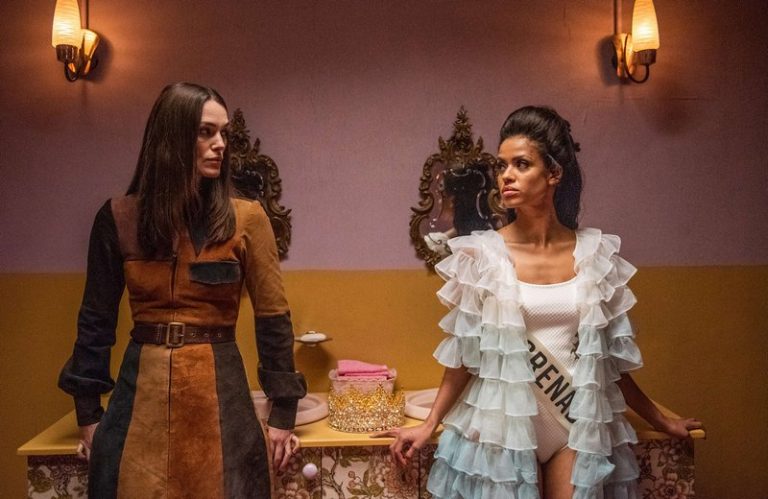 Misbehaviour tells the story of the women who tried to stop a beauty contest – but it isn’t the first film drawn to the high stakes world of competitive pageantry.

At its peak, the Miss World beauty pageant was watched by millions in the UK. The concept remains popular worldwide, but no longer airs on British TV. Thematically similar shows – i.e., women competing in swimsuits on reality TV – remain popular, but there’s less interest in bona fide beauty contests.

That said, many people enjoy watching or participating in pageants including Miss World, Miss Universe, and various child-based spin-offs. Whether it’s a niche you know or not, stories from this subculture can be fascinating and very human – from the uplifting to the disturbing (for example, the murder of 6-year-old beauty queen JonBenét Ramsey in 1996).

There’s also a broader social unease about judging people on their looks, and the moral ambiguities of enforcing non-diverse beauty ideals. Most pageants almost exclusively judge women – and therein lies a problem.

Pageants reward a certain look and attitudes over broader achievements and personal triumph. They celebrate women – but only when they adhere to (outdated) gender limits. The Miss World contest doesn’t admit mothers, for instance, while those who fail its moral and sexual standards have previously been stripped of their titles.

It’s not controversial to conclude beauty contests reward women for standing still – literally and metaphorically – rather than standing out.

The swimsuit round remains a main source of suspicion, along with other ways of displaying the female body for visual consumption. Look past the rituals, and the inherent voyeurism and vanity of such contests can seem surreal – if not downright odd.

The inherent conflict at the heart of pageants make them a fertile backdrop for cinema storytelling.

The beauty contest is a lens particularly suited to exploring themes of difference, identity, acceptance … and prat falls. After all, a tradition built on perfection is always only ever one step away from ridicule.

Misbehaviour (pictured) hasn’t been released at the time of writing, but what we know is that it’s based on a true story.

The film revisits an attempt by the Women’s Liberation Movement to disrupt the 1970 Miss World contest in London, England. [Here’s footage of the events that inspired the movie.]

“It seems incredible that [Miss World] was on TV … It really was a cattle market.”

Protester Sue Finch, talking to the Guardian newspaper in 2019

Misbehaviour sets out its stall early, with Keira Knightley and Jessie Buckley intent on destroying this spectacle of women’s oppression. However, later they discover oppression can be other side of opportunity, with Gugu Mbatha-Raw’s Miss Grenada claiming a watershed moment for diversity.

It was at the 1970 contest that Jennifer Hosten (Miss Grenada) became the first ever black winner of Miss World. She later described the experience as a revelation about race and racism, with the UK press openly discriminatory towards the black contestants.

So, while such contests reinforce a narrow set of norms about beauty and aspiration, Hosten’s victory said far more about freedom and inclusion than it did oppression. That makes the beauty pageant a tricky truth to reveal. Whether it’s friend or foe to the women and girls who participate is hard to say. Sometimes it’s both.

Beauty contests represent struggle (i.e., to be crowned the winner) – and that means plenty of drama, which is the bedrock of cinema. As a setting, it’s a useful counterpoint to more personal battles involving class, money, gender, privilege and race.

Greg Kinnear stars in both Misbehaviour and Little Miss Sunshine.

Misbehaviour isn’t the first film inspired by the 1970 Miss World protest. Somewhat unbelievably, the Carry On franchise got there first.

As with other films in this notably bawdy series, Carry On Girls is a vehicle for slapstick and titillation. In this outing, a British seaside town (…where else?) holds a beauty contest, only to be upstaged by an angry mob of dowdy housewives. Here, the struggle pits sexual permissiveness against age, tradition and ‘frumpiness’, and is played for grotesque laughs.

To be fair, all the characters are fair game for ridicule: even the clueless mayor loses his pants. The pageant finale, however, is a whole other level of awkward. Thanks to itching powder and washing-up liquid, the beauty contest becomes a freak show of bikini-clad women scratching, sneezing and convulsing their way across the stage (while the audience points and laughs).

Pageants are all about rules and insider knowledge. Similarly, Little Miss Sunshine explores the arbitrary rules imposed on little girls, and the duality (and hypocrisy) that involves.

The film ends with Olive performing a routine that gets her banned from the contest. The ruling doesn’t make sense, because Olive’s adult dancing isn’t markedly different to the way the other girls mimic grown-up women (i.e., in their hairstyles, tans, dresses, make-up and behaviour).

For Olive, who anyway doesn’t fit into this plastic Barbie world, this is the risk of ‘being yourself’. In real life, you don’t always win friends and influence people by being an individual – not when social success often depends on conformity.

Olive’s family doesn’t fit in, either. Between an uptight father, suicidal gay uncle and a brother who won’t talk, it’s not easy finding a place in a world that doesn’t want you the way you are. The joy of the film, however, is that the family make a refuge for themselves through solidarity and acceptance – and by not giving a hoot about made-up rules.

Carnelle Scott (Holly Hunter) has grown-up in thrall to a cousin’s beauty pageant success. Carnelle enters the same contest as a way to connect with the past and reinvent herself – it’s a rite of passage (Olive Hoover’s pageant ambitions similarly shadow the journey into puberty).

Albeit much older than Olive, Carnelle is another misfit: she’s not graceful or charming, and isn’t flawless on stage. Bound by the fragile notions of self she learned as a child, however, Carnelle is set on this disastrous dream.

Similarly, Carnelle’s cousin Elain (Mary Steenburger) fixates on her own childhood success. Each tries to preserve the roles they had back then, unable to see that – like a winner’s sash – such notions are transient, and can be taken off anytime they like.

The beauty contest stands for tradition and a disappearing world (one built on racial and social hierarchies), and in doing what looks good in the eyes of others. Unsurprisingly, it’s a prescriptive place to be. And yet, by trying to walk the line and failing, Carnelle is able to carve out a path of her own.

Identity isn’t a crown that others give you, but something you can decide for yourself. In that, Carnelle achieves the kind of agency and free will untenable in the rule-based pageant universe.

Miss Congeniality is part pageant movie, part makeover flick, which together makes it quite the revelation on how society recognises femininity.

Sandra Bullock’s undercover FBI agent Grace Hart is an emotionally bruised tomboy who chews with her mouth open and brings down bad guys. Then she’s entered into the Miss United States pageant to catch a terrorist and has to learn how to be a woman. That is, she actually takes classes … from a man, no less.

The beauty pageant is a source of comedy and confusion, especially when an outsider or misfit (Bullock) tries to navigate this closed world. As such, the spotlight shines especially scathingly on ridiculous social convention, from attitudes about gun control to the cost of vanity.

As a beauty queen, clueless Hart is a Bullock in a china shop. Meanwhile, her fellow contestants are portrayed as dumb but willing prisoners in an open jail, one that dictates what and how much they eat and drink. Of course, you could argue that this either misses or makes the point that consumer society places the same expectations on all of us, of all genders, all the time.

Why Die Hard 2 is littered with smoking references

What ‘Parasite’ says about being poor

Was Inception really an ‘intervention’?

Visions of beastliness in ‘Split’

The shark isn’t the biggest villain in Jaws

This website uses cookies to improve your experience. Necessary cookies are essential for the site to work, and can't be turned off. We also use third-party cookies that help us analyze and understand how you use this website: these cookies will be stored in your browser only with your consent. You have the option to opt-out of these cookies, but it may negatively affect your browsing experience.
Necessary Always Enabled