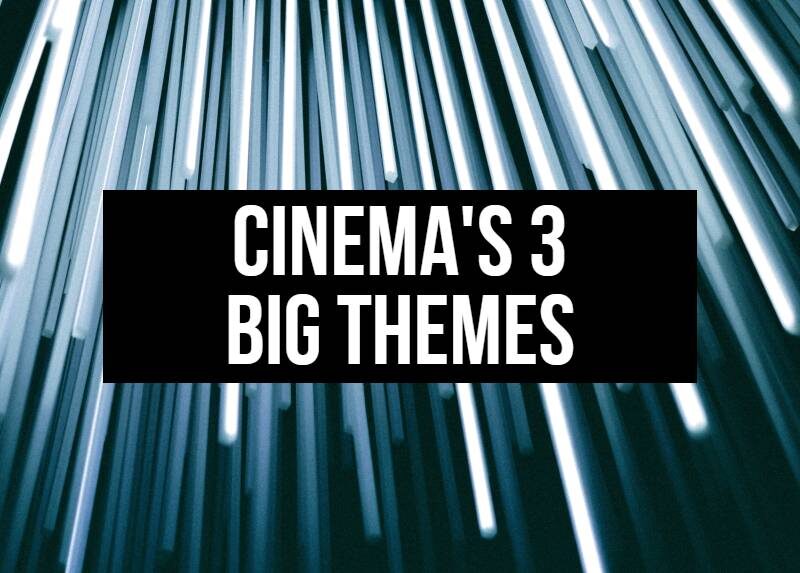 From sci-fi to cop capers, most films are vehicles for cinema’s three big themes: love, money and family.

Sometimes the norms – expected social behaviours – are so embedded that we’re not even aware we know them, let alone live by them.

Storytelling, especially in cinema, gives us a glimpse at the rule book … and sometimes even subtly reinforce the rules. But what are those rules?

Universal rules of cinema and society

The norms vary between cultures and communities but generally they keep us moving towards (or respectful of) shared goals. Some of the most prominent goals in cinema and society are:

Often, the journey undertaken by a film’s lead characters is about resolving (i.e., gaining) one of these goals. So the rules are what give a film its direction: they power the plot.

Characters in search of a norm

Many films begin by introducing a character who lacks or has lost their driving force, then follows their quest ‘back to normality’.

These archetypal human needs are so embedded that we accept these journeys unquestioningly, sometimes even unknowingly.

In Jurassic World: Fallen Kingdom, Chris Pratt and Bryce Dallas Howard battle dinosaurs to stay alive. Of course, ‘life or death’ is another universal theme – and yet, beneath that is it’s a story about two lovers looking for an excuse to reunite.

Along the way, they save Claire’s nephews, and face down a pack of raptors as a family unit. Between them they mimic the roles of mother, father and two sons.

Claire’s backstory even underlines the fact that she’s lost her family connections – in part because she has put business ahead of breeding.

These big themes are surprisingly common. As with Jurassic World, they often underpin the plot we think we’re watching. For instance:

Horror and thriller genres often subvert the initial set-up. These films typically start with family, success and love, then puts them in peril.

Split shows the carnage of destroyed families (Kevin’s, Casey’s and the birthday girl’s). Alien: Covenant sends happily married couples into deep space, then picks them off one at a time.

And in Darren Aronofksy’s Black Swan, the young girl who gets everything she ever wanted discovers it’s a doorway to destruction. For ballerina Nina, family means manipulation and madness instead of happily ever after.

Annie (1982) and Pretty Woman (1990) are both stories about outsiders – and they’re outsiders precisely because of family, love and money.

As a poor orphan, Annie’s quest is to reunite with the parents she lost as a baby. She eventually resolves this by gaining new parents (Daddy Warbucks + Grace Farrell). In fact, Warbucks solves all three life goals in Annie’s story.

When he adopts her, Annie stops being poor … and starts being incredibly wealthy. Their relationship also mirrors the ideals of romantic love, for instance, in the way Warbucks comes to accept Annie for herself, despite initially wanting a boy.

Their final duet, in which they profess undying love also sounds positively matrimonial:

“Together at last / Together forever / We’re tying a knot / They never can sever.”

A film about a prostitute might sound worlds apart from the story of a plucky orphan, yet Pretty Woman revisits many of these same themes.

Both characters are clueless to the arbitrary rules society expects them to play along with. Annie fights boys, adopts a dog, and offers to clean Warbucks’s windows. She’s also far too honest and outspoken.

Common to the romance genre, both Annie and Vivian are given shortcuts to normality by a knight in shining armour. For Annie, it’s Daddy Warbucks. For Vivian, it’s wealthy lawyer Edward. Both resolutions are rooted in fairy tales – there’s even an acknowledgement of this in Pretty Woman’s final scene:

Edward: “So what happened after he climbed up the tower and rescued her?”
Vivian: “She rescues him right back.”

Incidentally, Vivian’s love story is also about acceptance: Edward loves her “just as she is” (anticipating Bridget Jones’s Diary by a decade). In modern cinema, self- and other-acceptance has perhaps become an extension of ‘love’.

Romantic goals and financial gain have become inextricably linked in stories about women – unlike their male counterparts, it remains difficult for female characters to be ‘self made’. See also Bride Wars.

That said, both Annie and Pretty Woman represent versions of the American dream.

These films take an outsider – someone with nothing – and have them achieve love, money and family. Ostensibly this success is because they never give up … though only if you overlook their good fortune in meeting very rich men.

The road to resolution

In mainstream movies, without lack, there’s no plot. Characters are always moving towards something and – more often than not – it’s love, money or family.

These norms are part of our cultural history, but does that make them OK? One consequence is that even when outsiders are celebrated on-screen, it’s by compromising some facet of their uniqueness.

Cinematic resolution is rarely about a character who decides to be alone, or stay poor or accept their failings (even though all of these things are truer to real life).

On-screen, even when a protagonist turns down the big offer, it’s in place of having achieved something else. For instance, the person who spends the entire movie chasing someone out of their league, only to realise their soulmate is the girl next door.

Such trade-offs are partly what makes cinema satisfying to watch. By resolving on obvious, unavoidable goals, mainstream films complete a journey audiences hanker for (sometimes without knowing it).

But the curious thing is that, even when films champion misfits and ‘the road less travelled’ … all roads lead to the same place.

The Stepford Wives and feminist dystopia