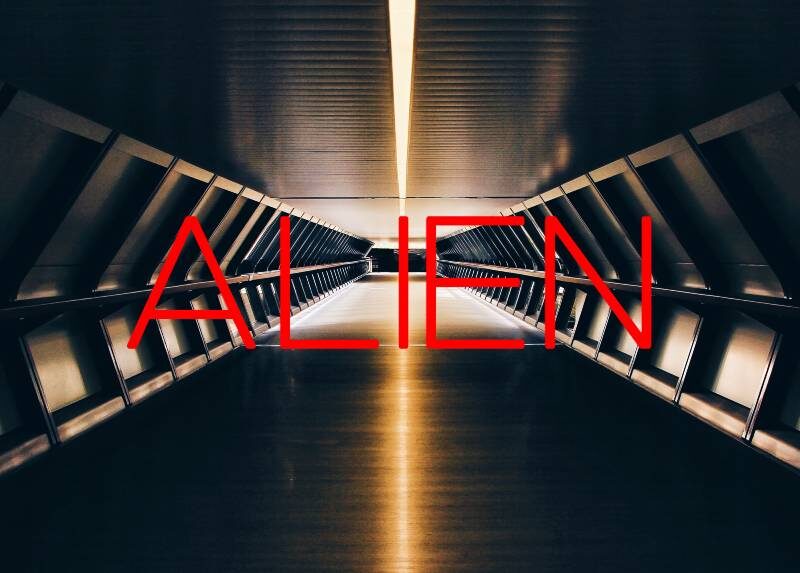 What is Alien about?

Deep-space mining vessel the Nostromo is carrying a crew of seven – plus cat – in stasis back to Earth. The ship’s computer Mother wakes them mid-journey after detecting a distress signal.

The crew land on a hostile moon to search for survivors, only to beat a hasty retreat when an alien organism attacks second officer Kane (John Hurt). But when they take him back to the ship they have no idea he’s carrying something that puts them all in mortal danger.

Serial killing in the name of profit

As with other horror/slasher movies, Alien is about a murderer bumping off the film’s characters one-by-one. Nightmare on Elm Street has Freddy Krueger, Halloween has Michael Myers. Alien has the xenomorph … though a number of characters have their hands on the trigger.

The film’s twist is that Ash – who has been passing as human until this point – is an android. Not only that, but he violates the First Law of robotics: don’t cause or allow harm to humans.

As ordered by the Nostromo’s commercial directors, Ash reroutes the ship with the sole intention of catching the xenomorph. His instructions are to treat the crew as expendable, and he carries that out to the letter.

The xenomorph’s value lies in its potential as a military weapon, yet Ash uses the weapon straight away. He directs the crew into the alien’s path as a means of keeping it unharmed, helping it breed, or feeding it, as required.

Arguably, there’s a chain of command which shields the real murderers. Ash uses the weapon, but under the command of the ship’s commercial directors. In other words, they kill the crew by remote control.

This theme is common across the Alien franchise (and Jaws). Profits ahead of people leads to destruction. Or, in other words, capitalism kills.

Sigourney Weaver was relatively unknown when originally cast as Ripley. Much later, she shared co-lead with Holly Hunter in Copycat (1995). What’s interesting is the way Alien foreshadows some of the genre patterns of the later film – which is about a serial killer.

Isolation is a key theme in both movies. In Copycat, Weaver’s character has agoraphobia and can’t leave her apartment. This leaves her a sitting duck for the serial killer. In Alien, the crew launch into space with the xenomorph already onboard, turning their escape route into a dead end.

Later, Ripley tries to blow up the ship – an act which traps her in even closer proximity with the alien. The film’s ending exactly replicates the earlier escape attempt, but on a smaller scale. This ramps up the tension considerably, because now there is literally nowhere to run.

Both films also use mimicry as a source of danger. In Copycat (and many similar movies), the killer hides behind a number of identities. He can’t be easily stopped because he looks like any other human out there – a strategy also at play in Alien.

Inevitably, there comes a moment when the killer steps out from behind the mask and is revealed – compare also Hannibal Lecter taking off his human skin mask at the end of The Silence of the Lambs.

In Alien, Ash likewise pretends to be ‘any other human’, a deception that allows him to kill undetected. However he’s not human … Ash is literally alien: hostile, a foreign body, having allegiance elsewhere. In a sense, the movie’s title refers to him just as much as the xenomorph.

There’s a visual reminder of this mimicry in the film’s final scenes – when the alien hides in Ripley’s escape pod, and she can’t tell it apart from the craft’s pipes and machinery. It’s even repeated at the end of Alien: Covenant, when we’re not sure which android is which. Again and again, killers rely on mimicry.

In Alien prequel Prometheus the human crew are on a mission to discover their creators. Things get muddied along the way: partly because of greed, but also because of David’s desire to be ‘a real boy’. He wants to create almost as much as Weylan wants to be a god.

Alien: Covenant shows David finally achieving this. He gives birth to the xenomorph – albeit by using Shaw as a surrogate mother (completing the fate she escaped in Prometheus).

Related: Motherhood on trial in The Nanny

This theme of mis-creation first appears in Alien. The ship’s computer is called Mother. Ash uses a surrogate to birth the xenomorph, though this time it’s Kane’s body. Ash even refers to the alien as ‘Kane’s son’.

Across the franchise, whenever the alien respawns, it’s through the chest or throat – anywhere other than the womb (with Shaw’s Caesarean delivery/abortion in Prometheus perhaps coming closest to bucking the trend).

Alien (1979) followed on the heels of the first successful test-tube baby (Louise Brown, 1978), so you could see the film as a reflection of its time – when science was experimenting with conception beyond the womb.

Either way, the film forges a speculative cinematic world in which men, and then robots, usurp female acts of [pro]creation.

This new vision of creation is not without its dangers: in fact, it seems almost indistinguishable from death. Of course, it’s not life that the corporate gods seek in the Alien franchise, but power … and that can be achieved through either creating OR killing. This is the lesson for the androids – and they learn quickly.

Rebecca (1940) explained: the ghost, the devil and Mrs Danvers