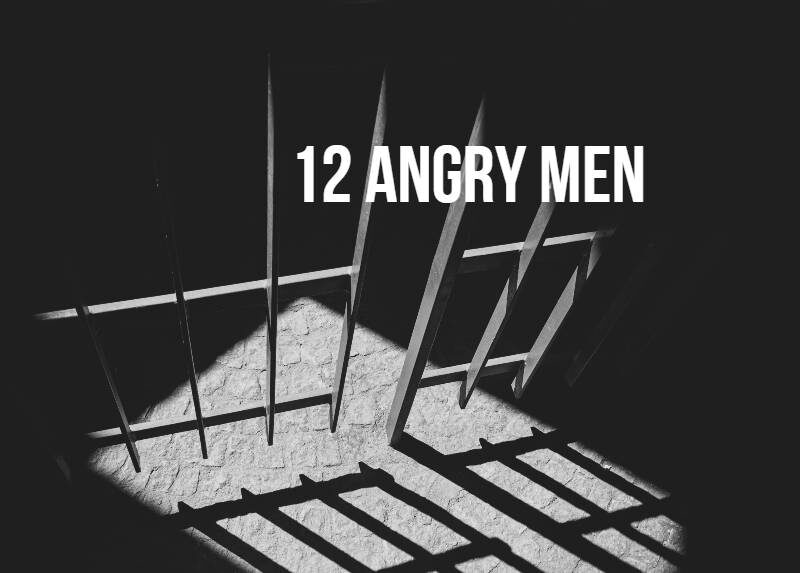 Sidney Lumet’s classic courtroom drama 12 Angry Men takes bigotry to task – but does the film live up to its own standards?

What is 12 Angry Men about?

When a working-class teenager is accused of killing his father, he seems undeniably guilty. The jurors think so, too – all except for the man in the white suit. Now it’s up to him to persuade the others to think twice about sending the boy to the electric chair.

Sidney Lumet’s 1957 film is a tightly scripted mix of courtroom drama and whodunnit, and flips between cool logic and simmering tension. Memorably, the film takes place in a single room, and plays out in real time.

Despite its age and social distance, the film’s themes – of calling out prejudice and lazy discrimination – remain very relevant. This page unpacks how the story works, with spoilers.

The 12 angry men of the title are the jury. But while the tensions bubbling under the surface create the film’s mesmerising dramatic tension, it’s really about ONE angry man in particular: juror #3.

We have to call him juror #3 because the film doesn’t name any of its characters. At the very end we hear the surnames of two of them (Davis and McCardle, who are jurors #8 and #9). The rest of the time, we only get to know the men through their emotions and job titles.

The only other identification the men have are their jury numbers. This makes for an interesting parallel with criminal gangs. Compare how the gang in Reservoir Dogs use nicknames to hide their true identities (and how their true identities burst through regardless, exactly as they do in this film).

Who are the jurors in order?

How the film ramps up the tension

Lumet works hard to keep the plot as taut as possible. He has to, because everything takes place in a single room with a limited cast of characters (keep in mind that Reginald Rose first wrote this as a television play).

The audience has a couple of things to worry about. Firstly, there’s the murder. A teenager is accused of killing his father in cold blood, an event described in gruesome detail.

With the boy now facing the death penalty, his fate is another source of tension. We have to weigh up the evidence and make up our minds, just as the jury does.

The jury room is another source of tension. There’s an all-male jury, with several aggressive, ‘alpha’ characters battling for dominance. On top of this, the door is locked, creating a stifling, claustrophobic feel.

The weather mimics these tensions. It’s one of the hottest days of the year – a real punishment in a locked room with no working air conditioner. When the storm breaks it mirrors the emotions overflowing inside the room.

But the real source of the film’s conflict is the antagonism between the characters, specifically juror #3’s rage.

Initially, the men judge the defendant through their own prejudices and lived experience. And juror #3, who steers much of the in-fighting isn’t judging the boy at all. He’s playing out his own failed relationship with his son.

The jurors are the ones in the dock

In 12 Angry Men, the murder plot is a device to bring the main drama to the stage. The jurors are judging a working class kid. But we’re judging the jurors.

Specifically, the film turns the lens on prejudice, racial discrimination, anger, and apathy.

The film shows us the consequences of these character tropes: they’re personally and socially damaging. Then juror #8 gives them (and the audience / society) the chance to do the right thing.

Why does juror #8 wear a white suit?

Fonda’s juror #8 appears to wear all-white, a choice that links him to other heroes in cinema and popular culture [however, it’s important to point out that this is a kind of historical colourism – the implication of white as ‘good’ and black or dark colours as innately ‘wrong’].

Juror #8 stands out. Unlike the others, he doesn’t gossip or waste words. He’s quiet, thoughtful and serious. #8 alone has a doubt about the boy’s guilt. But that doesn’t mean he’s certain the boy is innocent. He explains:

We may be trying to let a guilty man go free, I don’t know. Nobody really can. But we have a reasonable doubt, and that’s something that’s very valuable in our system. No jury can declare a man guilty unless it’s sure.

Juror #8 is everything Angry Dad isn’t. He’s patient and slow to anger and, in his white suit, seems almost saintly. I think this is intentional. Fonda plays the ‘Jesus character’ – one who serves to provide redemption to the others.

Once they see the light, they (mostly) take up his cause to preach to the others. And it’s a potent message. The film would have us believe that discussion, democracy and fair-mindedness is enough to dismantle hate and discrimination.

In reality, it’s rarely that easy (compare Detective Somerset in Seven). However, keep in mind that, for all the film’s preaching about discrimination, there are no women and no Black jurors.

Henry Fonda may represent the ultimate noble-minded human, yet the film is limited by the flaws of its era.

How #8 converts the others

The film has to work hard against the confines of the single room. One of the ways it does this is in varying the way the jury votes each time (each time #8 wins over more votes):

How they re-interpret the evidence missed by the trial

Each switch in votes follows examination and discussion of the evidence. Juror #8 leads on this, showing how the trial’s assumptions don’t hold water.

It’s a film about men, boys and maturity

The man in the white suit leads the other jurors to the path of righteousness and right thinking. More than this, he saves the life of a young man – one who’s been kicked around and abused all his life.

Fathers and sons appear throughout the film in various guises. There’s the dead dad and the boy on trial. There’s also Angry Dad and the son he’s pushed away (thanks to his equally toxic take on masculinity and manhood). The other jurors also talk about bringing up children and teaching them right from wrong.

Juror #9, the old man, talks about the sadness of growing old, too. He says old men are considered unimportant and invisible. He’s talking about one of the key witnesses, but he also means himself.

There are only male characters on screen, including the defendant and the judge. And much of the film’s tension arises from the pecking order they put themselves into, from alpha men to jokers.

But, like anger (and the prejudice it gives rise too), they can’t contain their true personalities. One by one, we get a glimpse of the characters hidden beneath the surface. And some are better men than others.