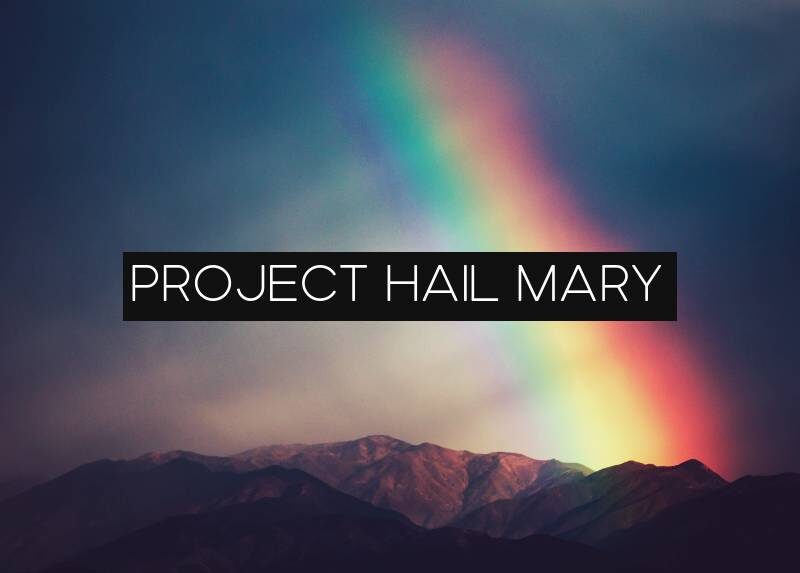 Project Hail Mary has its flaws. Does it matter? Not a jot. Weir’s story elevates The Martian’s familiar outline to something truly memorable.

When he wakes up, Ryland Grace doesn’t know who he is, never mind where he is. The only certainty is that he’s in some kind of locked facility … with a couple of dead people.

Of course, we know what Grace doesn’t yet remember: he’s in space. He’s onboard the Hail Mary, an interstellar ship sent to stop the Sun from cooling. With his crew dead, that mission seems doomed to failure.

As his memory returns, Grace pieces together clues about his identity and the mission. Incredibly, it begins with the discovery of alien life: not little green men in UFOs, but microscopic single-cell organisms devouring the universe.

Project Hail Mary has some obvious similarities with Weir’s first novel, The Martian. Both transform the Robinson Crusoe archetype – of marooned men surviving on their wits – into stories of far grander scope.

In The Martian, astronaut Mark Watney is left behind on Mars. In Project Hail Mary, Ryland Grace is last man alive on a ship hurtling into deep space.

When the book hits its stride, it’s light years from Martian territory. Still, there are times Grace and Watney feel like the same person, and that person is played by Matt Damon*.

The similarity is most apparent in the thinly sketched emotional depth, buoyant optimism in the jaws of death, and the tendency to talk like characters waiting for a sitcom laugh track to kick in.

“You could pull mitochondria out of a living cell with one of these [nanosyringes]. Back to the microscope. ‘Okay, you little reprobates. You’re radiation-proof, I’ll grant you that. But how about I stab you in the face?’”

On the other hand, this is Weir’s home turf: hard science that’s still readable, funny and heartfelt. If anything, Project Hail Mary demonstrates Weir has honed his craft for approachable sci-fi since The Martian. This book is far more ambitious – even epic – in scope, though to be fair, attention to detail also sometimes swamps backstory and descriptive scenes.

* The forthcoming film adaptation of Project Hail Mary is set to star Ryan Gosling, but the observation still stands.

Project Hail Mary is absolutely a cinematic story. That some of the writing reads like screenplay cues further underlines this (“After a lot of ‘crazy prisoner scribbling on a wall’-type stuff, I have my answer”).

Also present are patterns common across sci-fi cinema. Like many stories set in space – especially those where Earth is in peril – the expectation of sacrifice looms large. It’s satisfying that Project Hail Mary finds a new way to explore this idea, though.

The title, from a Catholic prayer, signifies a very common sci-fi connection of itself: old-time religion in the secular, space age (see also Event Horizon).

Still, as sci-fi, not even God himself can intercede in this modern-day tale of imminent destruction. Instead, it’s down to human collaboration, persistence and, above all, hope to save mankind – though by linking redemption with the notion of sacrifice, religion is never far away.

If we’re playing cinema bingo, Grace’s innate heroism is the cherry on the cake. Commentary for The Hunt for Red October goes into more detail, but the bones of it are this:

Like films that employ this heroic template, there’s much that’s feels faintly implausible about Project Hail Mary. Not necessarily in terms of the science (I wouldn’t know, being quite honest), but certainly in human abilities and the probabilities of luck.

Project Hail Mary has its flaws. It’s sometimes twee, occasionally under-developed, and a little too reminiscent of a certain 80s sci-fi blockbuster. It’s clunkiest when it has characters play dumb about basic science as a means of exposition. Does this matter? Not a jot.

Initially, this is a tale that resonates with all the anxieties of our age, particularly the fallout from climate change.

The curve ball lands about a third of the way in, throwing both ship and expectations off-course. What Weir makes of this new direction is … really bloody good, it’s as simple as that.

It’s fair to say the book’s significance and character development comes in its second half. It’s here that the narrative shifts from easy-read blockbuster to solid speculative sci-fi, with something intriguing to say about and to the genre. How Weir deals with this elevates the story into something both moving and even archetypal.

The real trick is that, even if such bells and whistles don’t matter to you, this is an effortlessly cracking read. Look, no one’s more surprised than me. The biggest accolade I can give is that I’m already planning to read it again.