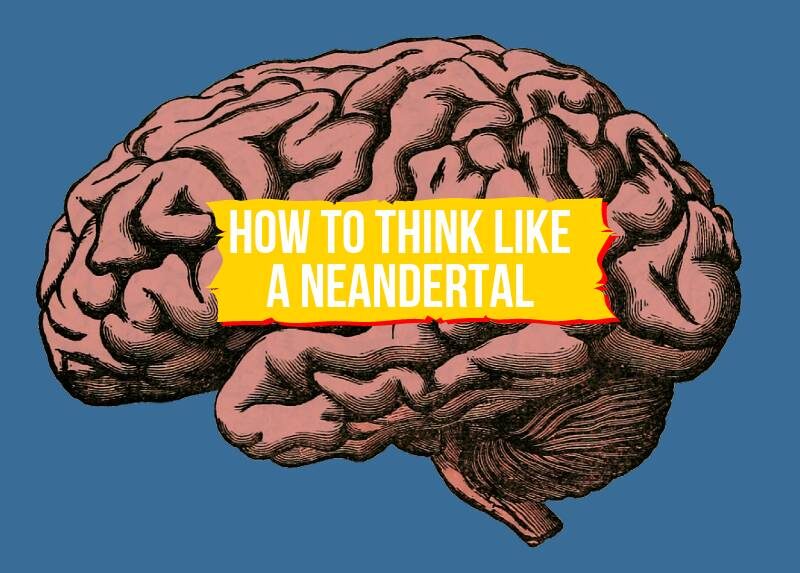 What How to Think Like a Neandertal teaches us about our (very) distant cousins – and what that reveals about us.

Why the long face?

Brace yourself: Neanderthals wouldn’t have made good politicians.

Neanderthals probably weren’t skilled at indirect speech – that’s the ability to say one thing and mean another. While it sounds two-faced, it’s essential to getting on peacefully with others instead of blurting out what your brain is thinking, #nofilter style.

And this left a Trump / Farage / Putin-sized hole in Neanderthal society, yes?

Well there wasn’t a Neanderthal society as such, and no politicians.

Perhaps. Though there isn’t much evidence of art, either. And while they probably had similar levels of intelligence to us – and were mammoth-hunting dynamos – they likely didn’t have complex language. According to the authors of How to Think Like a Neandertal (yes, that’s how they spell it) they weren’t interested in telling myths and stories either.

Dullsville – no wonder they went extinct. Or did we have something to do with that?

We don’t know exactly. Keep in mind Neanderthals weren’t our direct ancestors but were more distant cousins. Modern humans and Neanderthals share a common ancestor (Homo heidelgerbensis), and we co-existed at some point roughly 40,000 years ago. There’s some evidence homo sapiens – that’s our lot- attacked and/or mated with Neanderthals, and we all have a bit of Neanderthal DNA in us.

It may well be familiar if you’ve read Jean Auel’s fictional recreation of that time in Clan of the Cave Bear. Auel’s research was famously thorough; she even learned how to make arrowheads out of flint. In fact, much of what Auel describes in that book is backed up by the authors of How to Think Like a Neanderthal.

So … I could just read the novel?

You could, though there’s much the two books don’t agree on. And Wynn and Coolidge go into a lot more detail – and are just as readable.

On the downside, there’s some repetition, a few old-fashioned attitudes and a bit of conjecture – like whether Neanderthals were prone to anxiety. On the plus side, there’s a lot of incidentally fascinating info – like why we sometimes feel we’re falling to the ground when we’re nodding off. The sensation may have kept us safe when our ancestors slept in trees.

More importantly, Wynn and Coolidge show why Auel’s book is so accurate. Real skeletons and archaeological findings became characters in Clan of the Cave Bear. This book puts flesh on their bones, if you like.

How to Think Like a Neandertal, by Thomas Wynn and Frederick L. Coolidge

Why you should read: Liar’s Poker, by Michael Lewis

Under the Banner of Heaven, by Jon Krakauer

Why you should read: Rendezvous with Rama, by Arthur C. Clarke