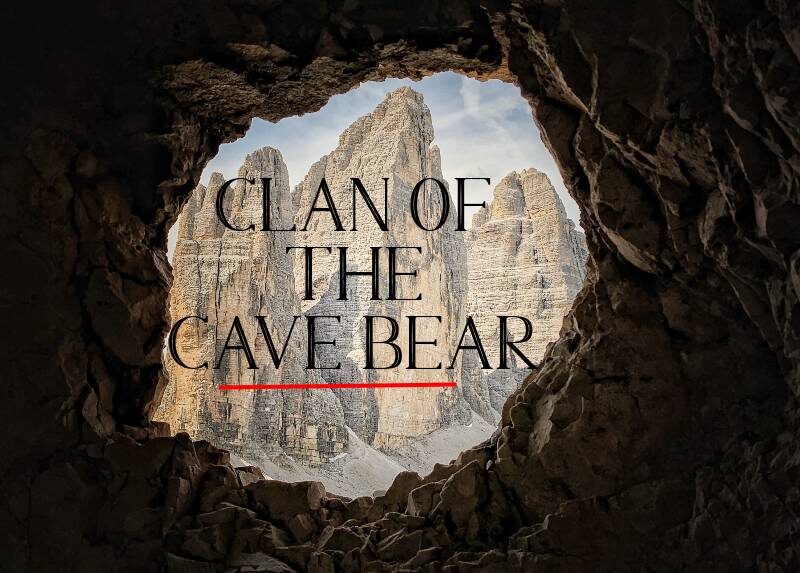 The first book in the Earth’s Children series, The Clan of the Cave Bear brings the world of mammoths and Neanderthals vividly to life.

Five-year-old Ayla is an early European modern human (i.e., Cro-Magnon) child. After an earthquake destroys her home she’s left at the mercy of the untamed environment. Then a Neanderthal tribe find her badly wounded but alive, and it seems like a blessing from the ancestral spirits.

But while her new family quickly grows attached to the girl, they’re very different. The Clan favour sign language over speech, and can access shared memories. They’re short and stocky with heavy facial features; the tall, blonde girl seems ugly to them.

Ayla does her best to become like her adopted family but has a wilful, independent streak that leads her into trouble. She teaches herself to hunt – an act of female rebellion that almost sees her cursed to death.

One Neanderthal hunter, Broud, hates her so much he vows to destroy her; it’s a tension that comes to dominate her life and the book.

A vivid version of prehistory

A non-fiction book, How to Think Like a Neandertal, shows how accurate Auel’s research was in conveying aspects of Neandertal life.

The author’s painstaking research is apparent in detailed descriptions of plants, recipes, animals and tools. She paints a compelling picture of religion, magic, housekeeping, menstruation, sex and childbirth, all details that bring this era to life.

“Everyone gathered around the large pit in which the haunches of bison were cooking. Ebra and Uka began removing the warm soil from the top. They pulled back limp scorched leaves and exposed the sacrificial beast in a cloud of mouth-watering steam. So tender it almost fell from the bones, the meat was carefully raised.”

The book’s plausibility drives its tension – but so does the knowledge that the adult structures Auel describes involve children, whom we’re told matured much earlier in prehistory. This includes an instance of rape, which has seen the book banned from children’s libraries.

Nonetheless, Auel’s imagining of the past is fertile and immersive. It suggests a strict male:female hierarchy which can be troubling at times, yet Ayla’s character arc offers a recognisably modern sense of equality.

There are interesting parallels with the Harry Potter series (1997 -), too. Both feature orphans who don’t fit in, are surrounded by magic, and who unfairly gain a sworn enemy (all common enough storytelling patterns).

There’s no hidden art to Clan of the Cave Bear. It’s a simple, even repetitive story that unfolds in a linear way. And yet it’s filled with fascinating ideas, not least the way it invites the reader to examine whether social habits and prejudices are ever truly set in stone.